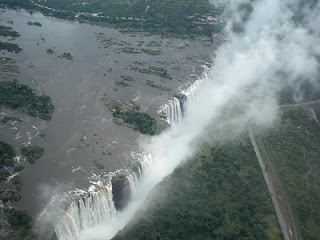 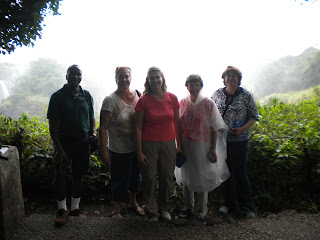 2010Major and I flew to Victoria Falls on January 26th and spent 3 days visiting with an alumnus of Chidamoyo, Cindy Kaess. Cindy came with a group from Adventure Christian Church in Roseville, CA during the summer of 2003. She also works at Sutter Memorial Hospital in Sacramento, CA where I started my nursing career. We have many friends in common who live and work there.
Cindy came with her mom Barbara, sister, Catherine, and group of 23 other people from the US and Canada who were touring South Africa, Victoria Falls and Botswana. So we were fortunate to fly down and spend the 3 days they were in Victoria Falls with them. We walked the Falls, shopped, bartered, walked in the rain and ate Mopani worms at the Boma Restaurant with them! They also paid for Major and I to fly over Victoria Falls in a helicopter—a first for Major to be in a helicopter! He was so excited!
We bid them goodbye and flew back later that afternoon to Harare and arrived in a big thunder and lightning and rain storm. We waited until Saturday early morning and drove home.