Buildings, Friends, University and a Scottish Wedding in Africa!


The rebuilding of the burnt part of the hospital is going well and we have found very fast builders.  They are promising to be done by September--we hope so.  They have added on a dining room and working around some existing walls now for the inside part.  Major is going to Harare this week to buy more supplies to keep us on schedule.  We are also building a new storeroom to keep all the drugs as we have not included that in the rebuild--since we want it away from any potential fire in the future!  Thank you for all your prayers and support and donations as we have struggled through this!
On  the 19th of July, my friends, Karen and Ben Pennington from Masvingo ( 3 hours south of Harare) came for a 3 day visit.  Ben and Karen have been missionaries in Masvingo since 1976.  We met then and have been friends ever since.  Neither one of us expected to be here in Zimbabwe, almost 40 years later!
I put Ben to work on Sunday preaching at church in the morning and the hospital service in the evening.  Then Monday I gave them a computer project which they started for me and helped me a lot to get most of it done.
On Monday the 21st Major and his wife Patience and Emily, our visitor left from Harare to take Major and Patience’s son, Michael, to University in Midrand, South Africa.  This is a city half way between Pretoria and Johannesburg.  He is 21 years old and happy to be going on to school after 1 1/2 years sitting and trying to do other things.  They took him down to get him settled and he started school yesterday on the 28th of July.  They were impressed with the campus, the security and all.  He is living in the dorms but has to cook for himself.  He likes instant Noodles so I think he will be buying that by the case!  Everyone enjoyed being in South Africa--the land of plenty and shopping!  Of course I sent a “small” list of things for them to bring back!!
On Friday the 25th of July I flew down to Bulawayo from Harare in the evening to meet up with them.  My plane was delayed and we weren’t sure we were going at all--but by 9 p.m. we finally reunited at the Lodge we stayed at.  On Saturday the 26th we attended a renewal of vows wedding of Sylvia’s nephew, Tribute Nyoni and his wife Thembi.  They had been married 6 years ago in Scotland and wanted to come home and have an African wedding for friends and family here.
Tribute and his best man wore kilts and it was a wonderful wedding!  They had it at a hotel that is a castle in Bulawayo--Nesbitt Castle.  We had so much fun and we were there from 2 p.m. until 11 p.m. and it was still going strong!  As the “Auntie” I helped with the cutting of the wedding cake.  We had fun with the dancing, dinner and the MC kept us laughing.  Many of their friends from the UK and SA came to celebrate with them.  Their 3 year old daughter, Caitlin,  was in the wedding party too.  They have recently moved last year to near London as Thembi works as a Radiology Technician and Tribute is a Psychiatric Nurse.  We wish them many more years of marriage!
On Sunday we got up early and ate breakfast and traveled the long way home from Bulawayo. We left at 830 a.m. and got back to Chidamoyo at 7 p.m.!  Major and I shared the driving so it went by faster!  We were all exhausted when we finally got home.
Our visitor, Emily leaves on Wednesday to fly Thursday to Victoria Falls to meet up with her mom for some days in the Falls and on safari before they leave for home from there.  She is excited to see her mom after a month away and excited to have company on her time in the Falls and on safari.  We wish her well in her future endeavors.
This week started with cold and overcast days.  Winter is still here--we hope it ends soon! 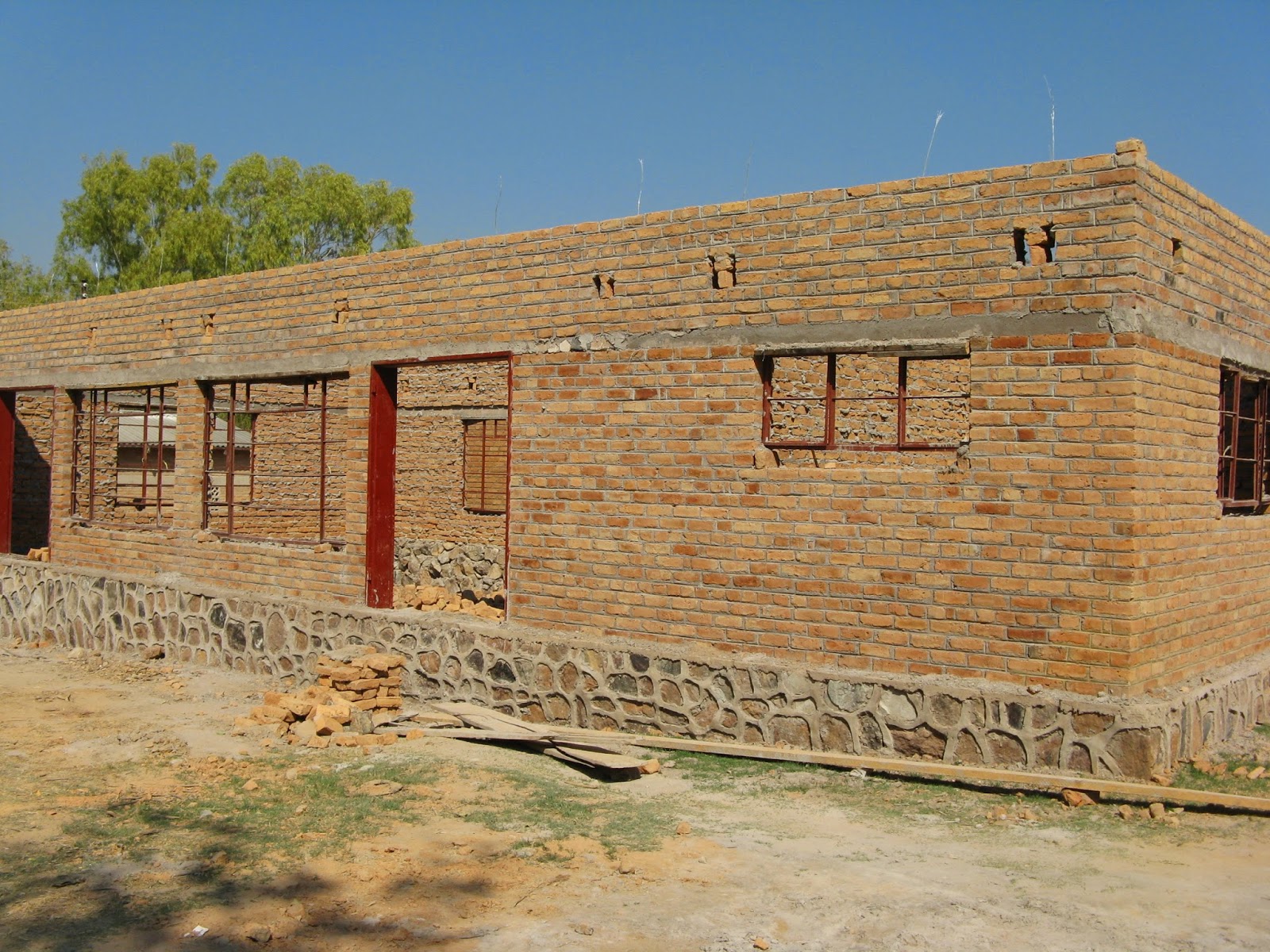 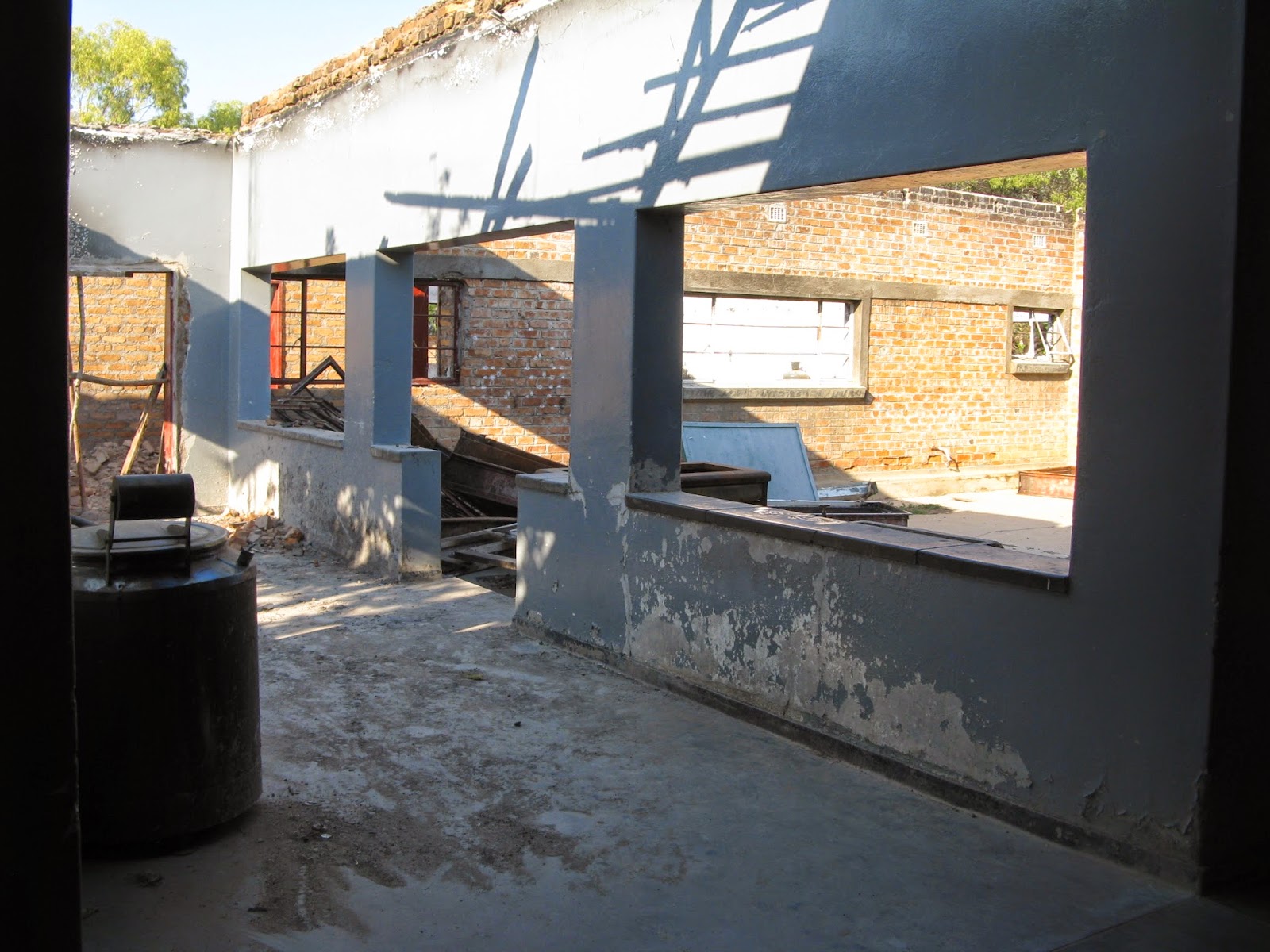 Rebuilding inside the old kitchen 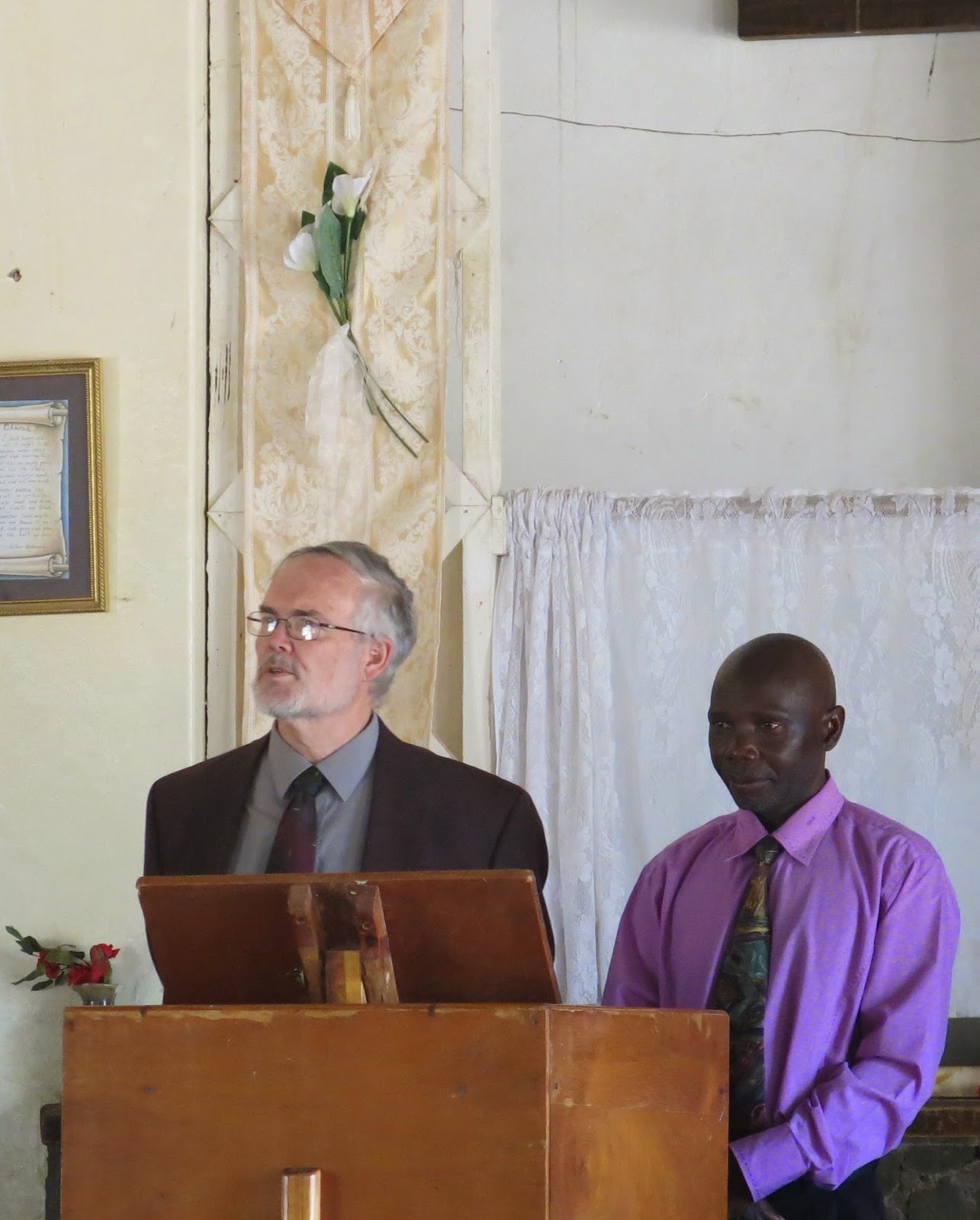 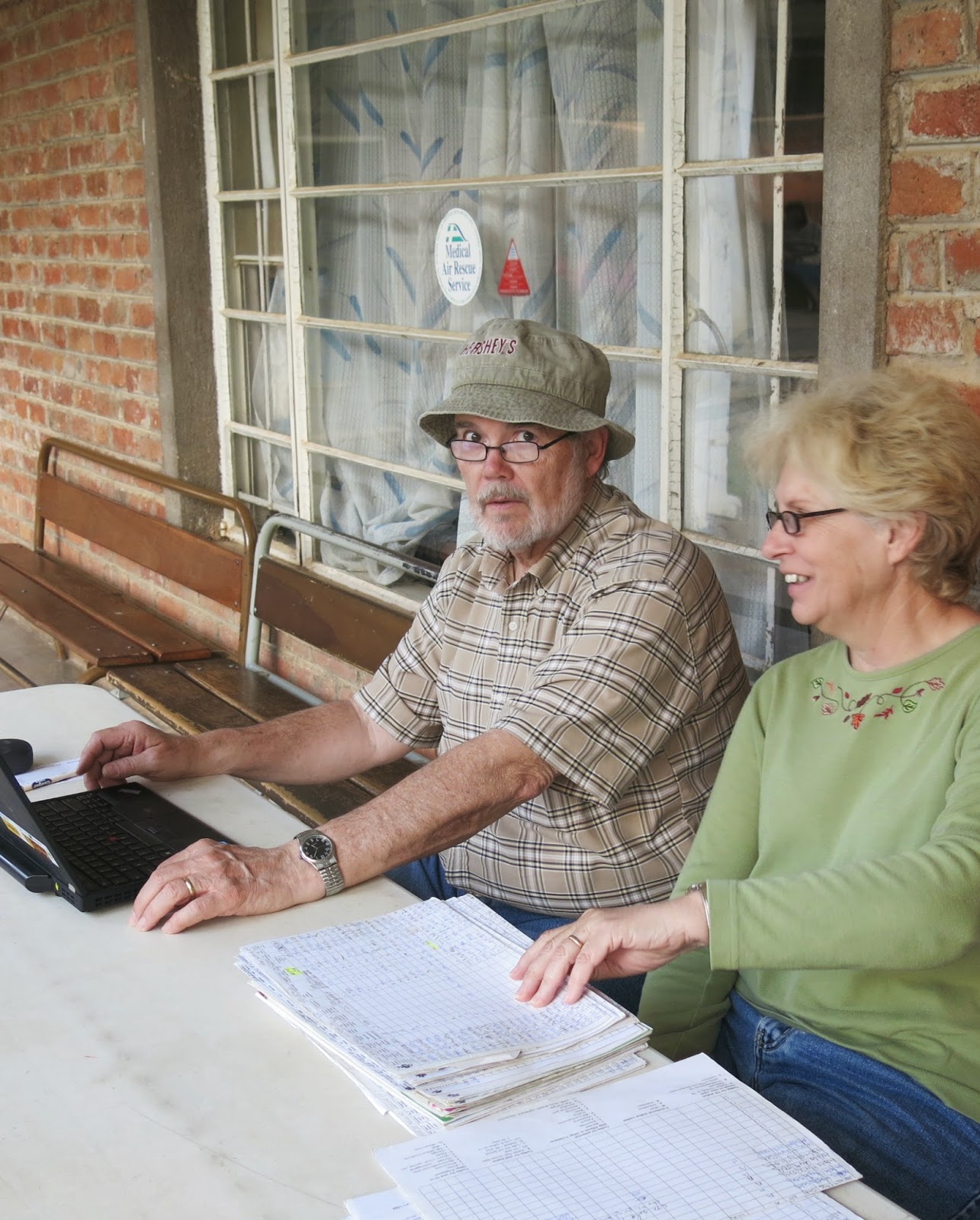 Ben and Karen hard at their computer work 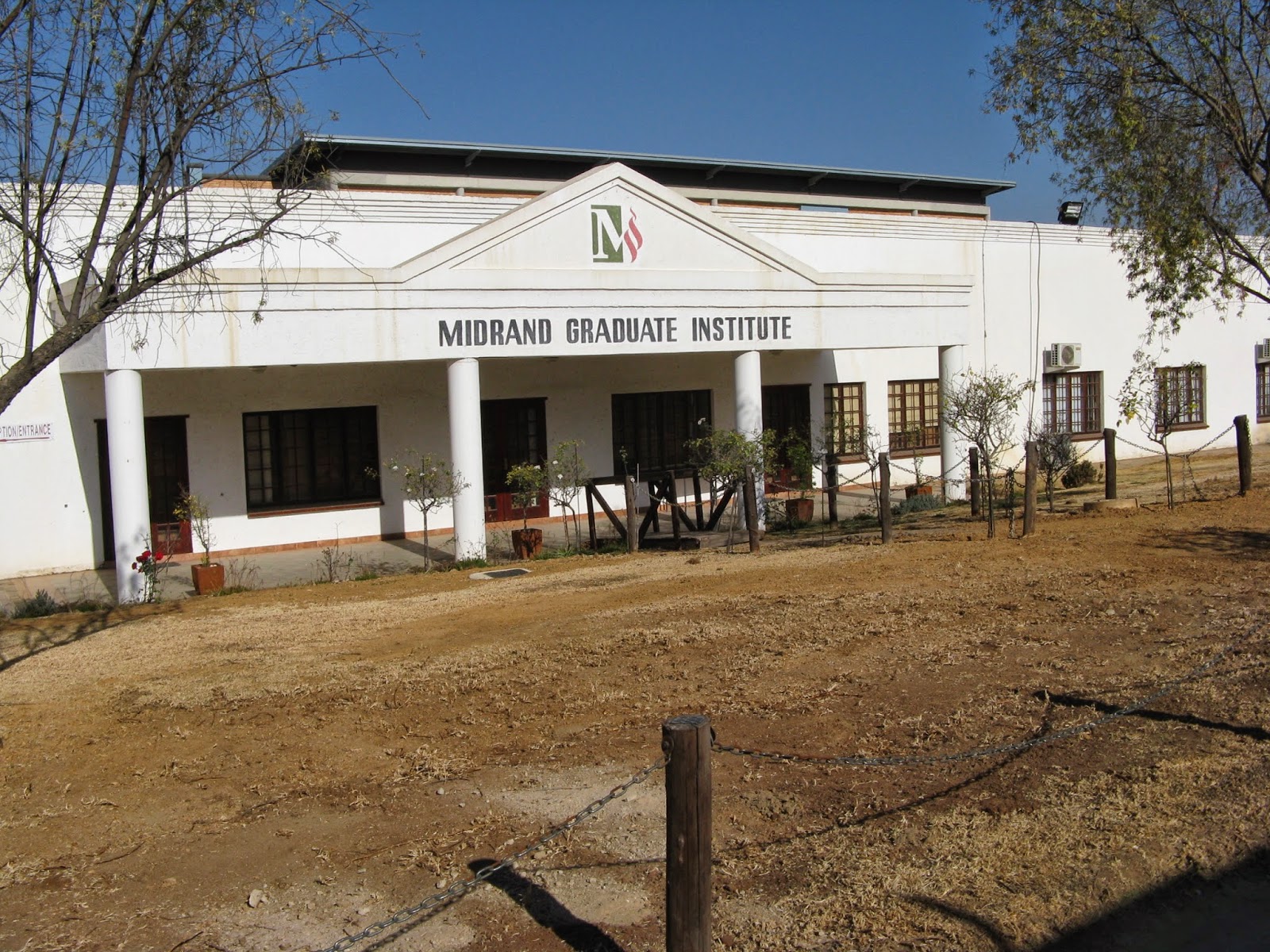 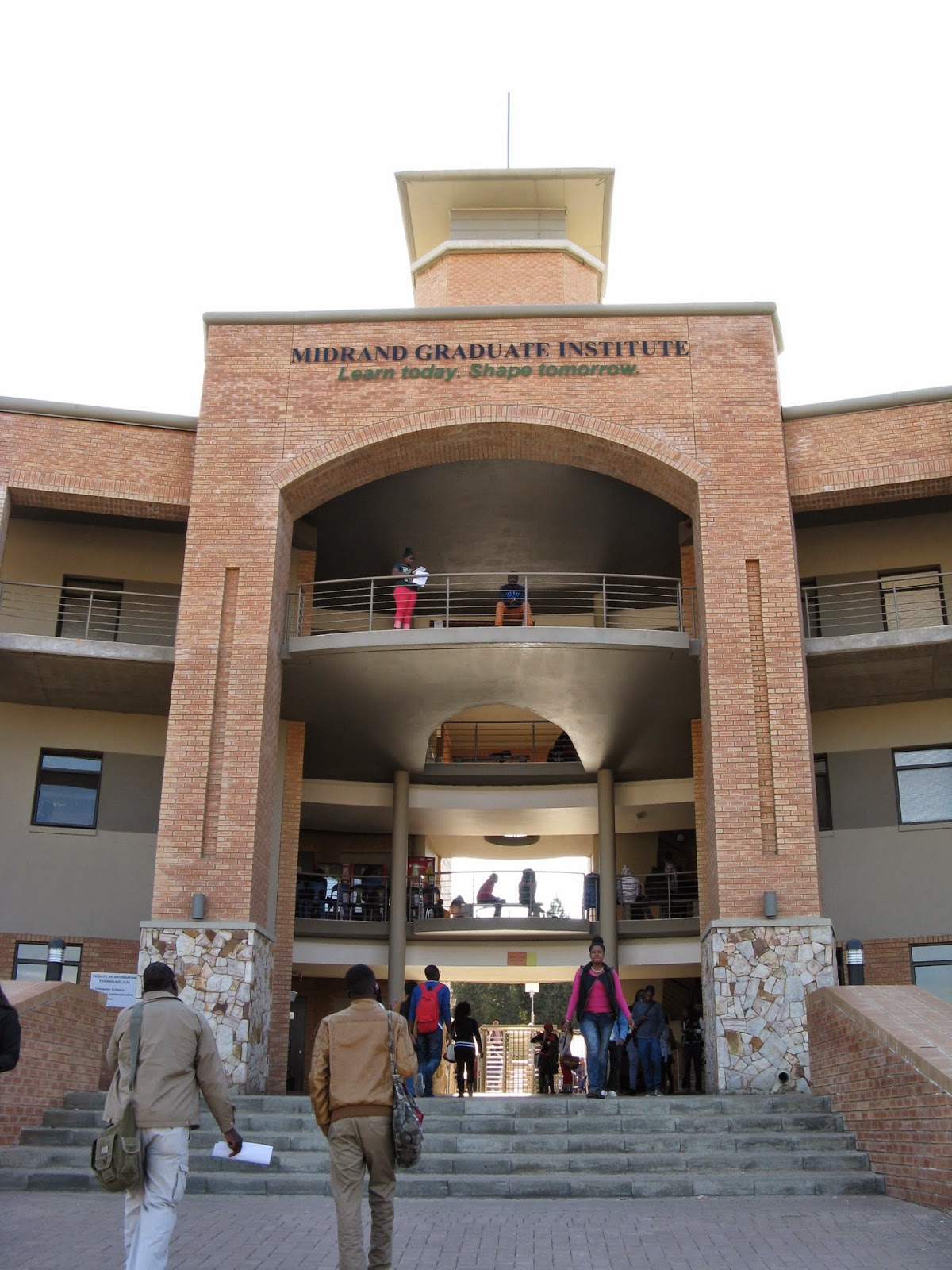 Major and Michael going up the steps of the dorms 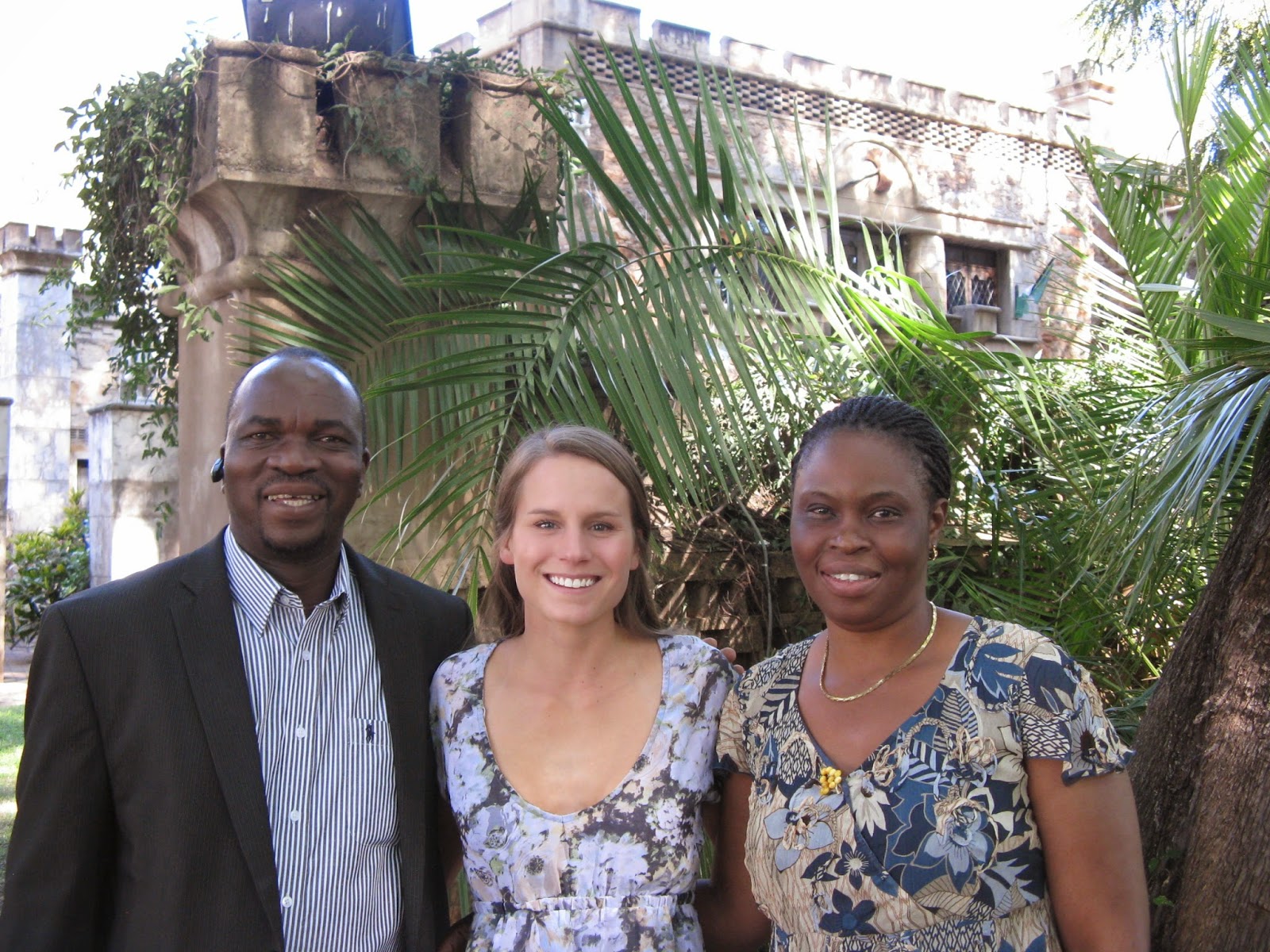 Major, Emily and Patience at the wedding 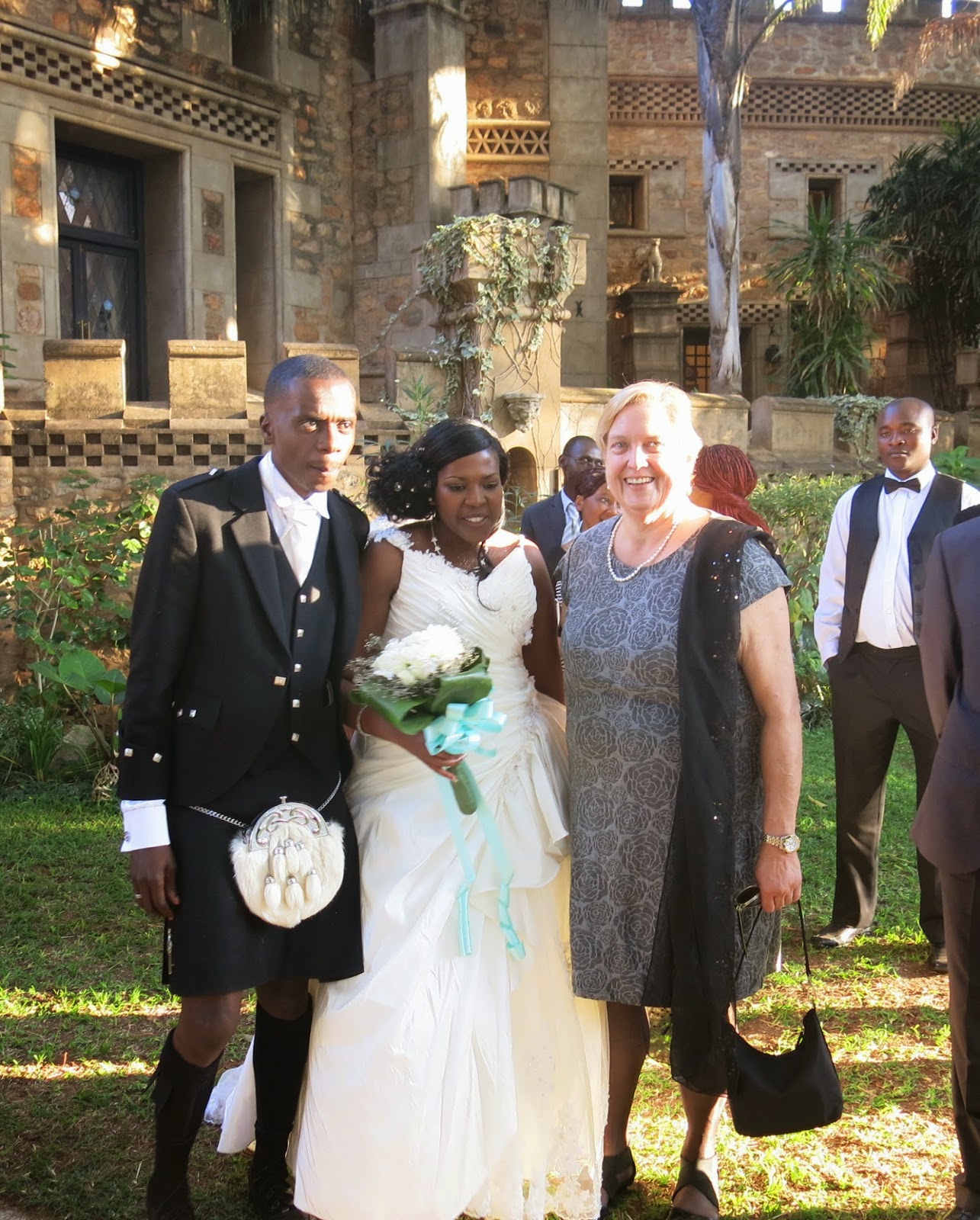 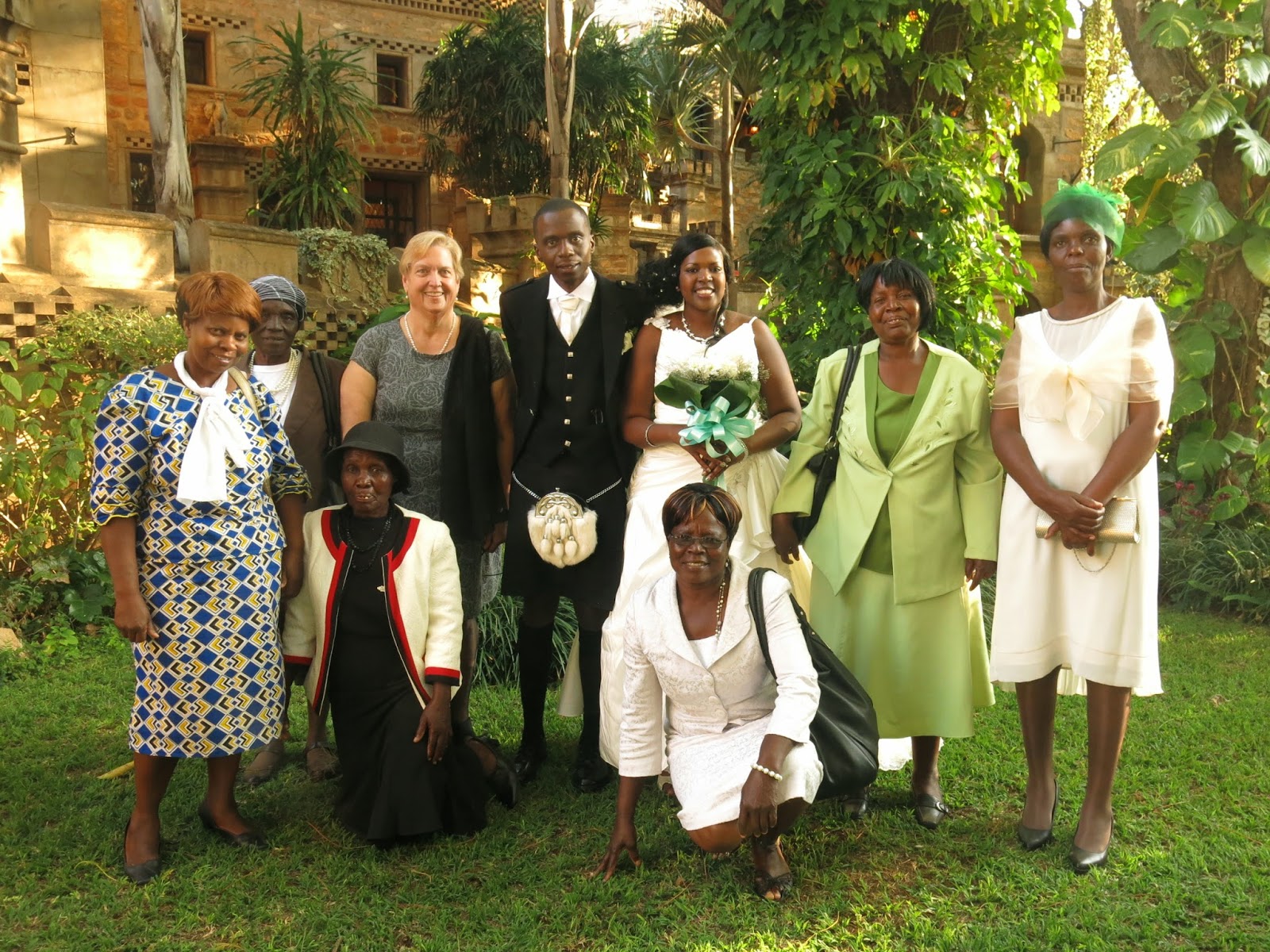 Aunts on both sides of the family with Bride and Groom 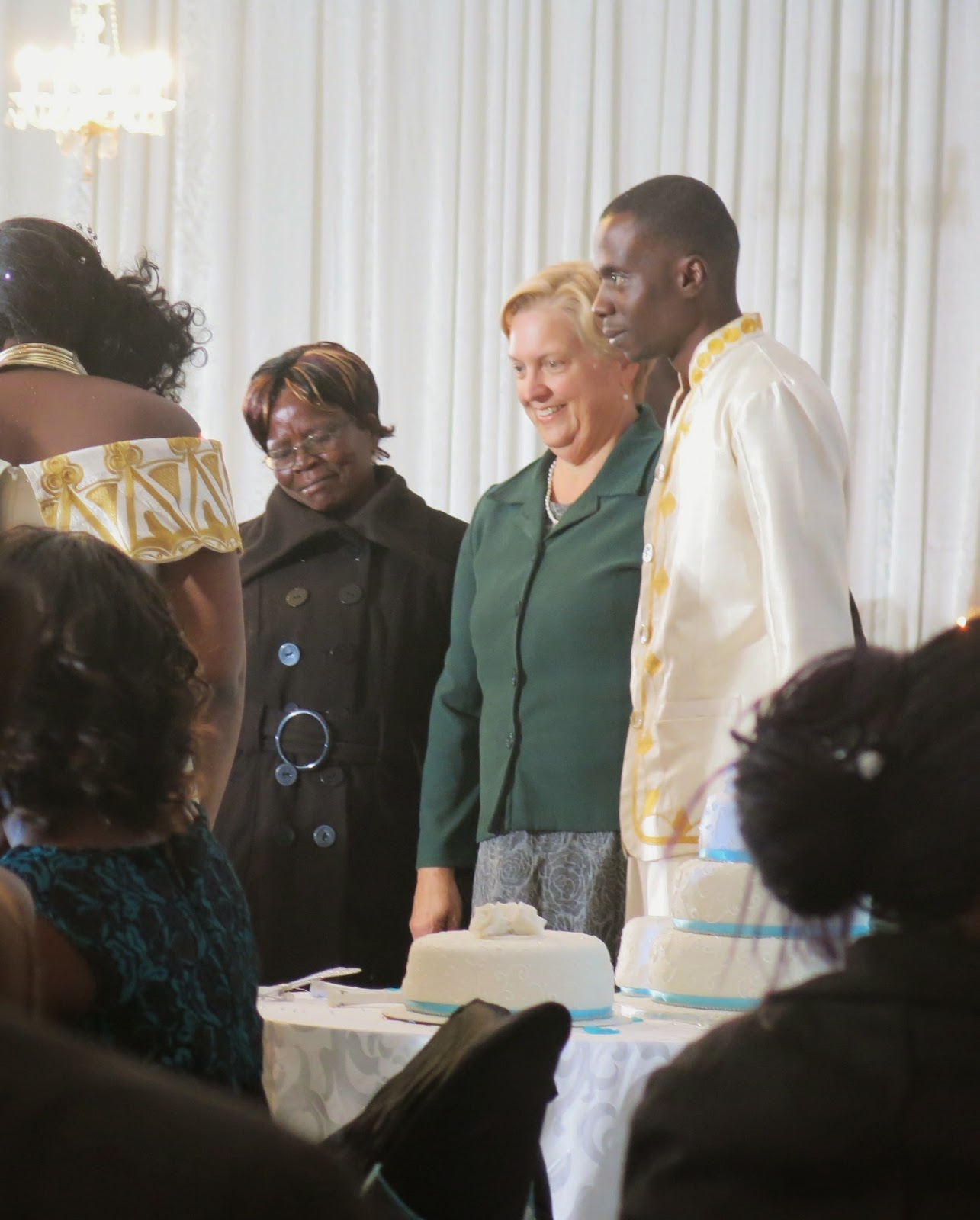 Aunts helping to cut the cake