Sorry it has been a month since I have written anything.   A month is almost gone from 2019! Life has been busy and interesting.
We celebrated New Years Eve at Batanai by having a band come and play music and hold a church service until midnight!  We didn't tell anyone but people were on the road waiting for something to happen!  We started the music and over 200 people came!  Then we showed movies and sang and danced the whole night to welcome in 2019!  At 6 a.m. we served tea and bread (there had been a shortage of bread over Christmas so we had been saving to have enough for NY Day!).  People had a great time and especially lots of kids came. We gave out sweets to all the kids the next morning!  We rested the whole day and then a heavy rain came as we headed for home and work the next day!
On the weekend of January 11-13, Major and his wife and son Michael and I travelled to Juliasdale (3 hours East of Harare) into the mountains to attend the Memorial Service for my friend, Gladys Jongeling.


Gladys died on December 8th at the age of 81 after a massive stroke in October.  She was a big part of our life at Chidamoyo and served as our Administrator from 1989-1992.  Major and I had been up to see her the end of September and were happy to have visited with her then for a few days.


The service was held on Sunday morning after church and was very nice.  Gladys had served on the board and as pianist for several years at this community church in Juliasdale. Mark, Lynn and Peter Johnson from the US came out.  Lynn planned the service and did the Eulogy.  His family worked with Gladys at Mashoko and were great friends through the years. Their mom and dad, Doug and Frances Johnson were missionaries at many different mission stations for many years and the boys grew up here.

Denise Hill, a great friend that Gladys worked with in Bulawayo in her early days in Zimbabwe, and then she moved to Harare and then S.A. and now England, flew out for the service.  Gladys and I visited with her many times in SA and England.  It had been 10+ years since I had seen her so it was great to see her.  We enjoyed a lovely lunch afterwards and then started our trip home—all in 1 day as we needed to be at work on Monday. (8 hours!)


When we got to Harare we tried to get fuel to get the rest of the way home.  Fuel had been impossible to get for several months, but on that day they raised the fuel from $5.60/gallon to $12.36/gallon!  Suddenly the long queues got better because no one could afford it!  We did get a full tank for $278!!


We arrived home at 12:30 a.m. Monday and we began to hear things at work that people were starting a stay away in Harare to protest the fuel prices.  We really didn’t know much was going on until our driver went to town for our weekly grocery trip and found the road on to Chinhoyi had been blockaded with burning tires!  All stores were closed and the District Hospital had few people working.  We told him to quickly turn around and get out of town.


The schools here were closed down for the rest of the week.  We continued to work but had few patients because the commuter vans (Kombis) and buses were not running in protest to high fuel costs!


On Tuesday the government shut down all social media sites and eventually internet.  Only text and phone calls were open. Then they opened the internet for a few hours and closed and it went back and forth as lawyers argued in court.  My emails to home said—it’s on now—then off again then on again!  Back and forth for 4 days.  Social media was off until Saturday pm and then crashed when it came back from overuse all at once!


Things stayed quiet here and we continued with our work, but with less patients.  We ended up having to transfer a patient to Karoi and then they were able to get their ambulance through to get her to Harare.


Every business stayed closed from Mon-Wed and people stayed in their houses.  There was violence in some cities as protests turned violent.  Thursday people were to go back to work, but many were still unsure and without internet most businesses couldn’t function, so most people stayed away the whole week, so nothing got done that week—even banking!  Internet really affected everything because all goods in Zimbabwe are mostly bought with Debit cards (called Swipe Cards here), so even if stores were open there was no access to paying with no internet.


Over the weekend I got very sick with what I thought was a kidney stone and so Monday Major took me to see my urologist in town.  He wanted me to have an Ultrasound first so we ran around trying to get that done.  It took all afternoon and 2 places as they were trying to make up for the week before where they couldn’t work and so had those patients too!


After the ultrasound I then needed a CT scan—got that done and saw my doctor at noon and by that evening was admitted into the hospital.  Wednesday I had a renal stent put in and spent until Friday in the hospital getting IV meds.  By that time I was feeling much better and Michael Mereki came to pick me up and we did errands and then went to see the new Mary Poppins movie at the theater!


Saturday we came home and I was able to rest on Sunday and came back for work on Monday.  I am feeling very well now.  Have a Foley catheter in for a month but can work with no problem and so far no infections or fevers and doing well.


Thanks for everyone’s concerns and thoughts and prayers during these difficult times.  Things are still uncertain and tense and nothing has changed as prices continue to escalate.  Doesn’t seem like much was achieved during these protests as fuel is still high.  There are suddenly no queues for fuel as most people can’t afford it.  Still Kombis and buses are not coming as before and if they come the prices are so hard for our patients to afford.  Please keep those prayers coming! 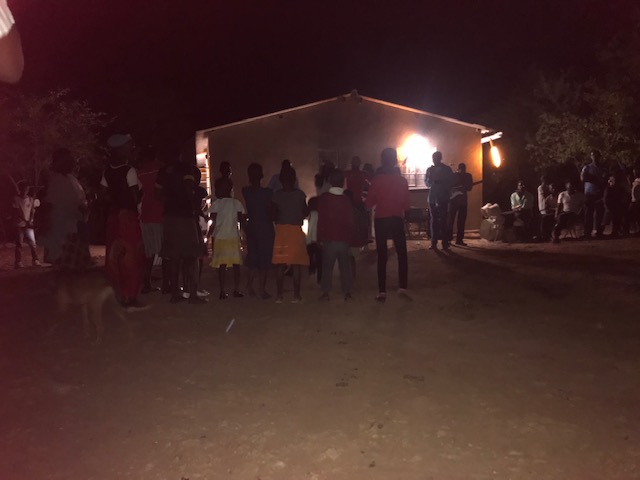 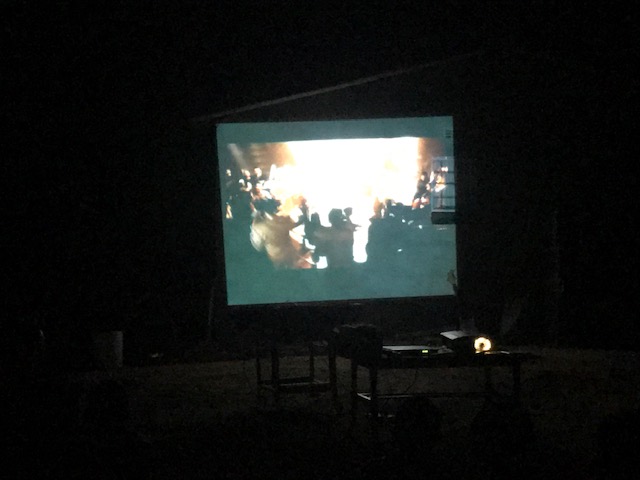 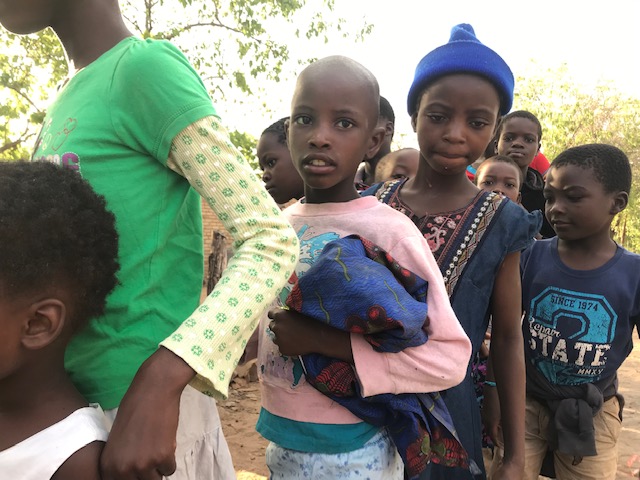 Giving out sweets to kids at Batanai 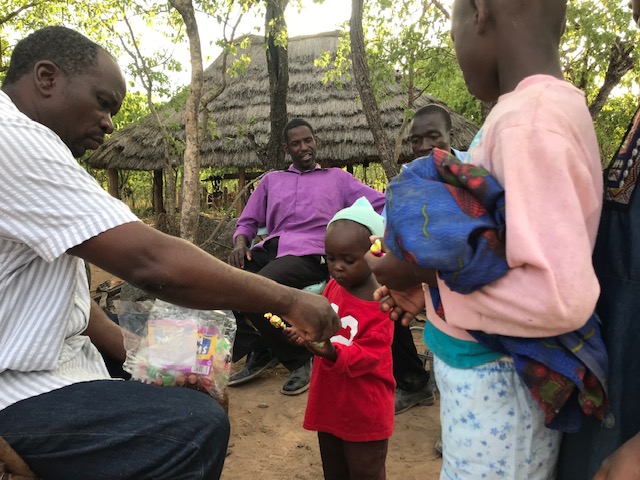 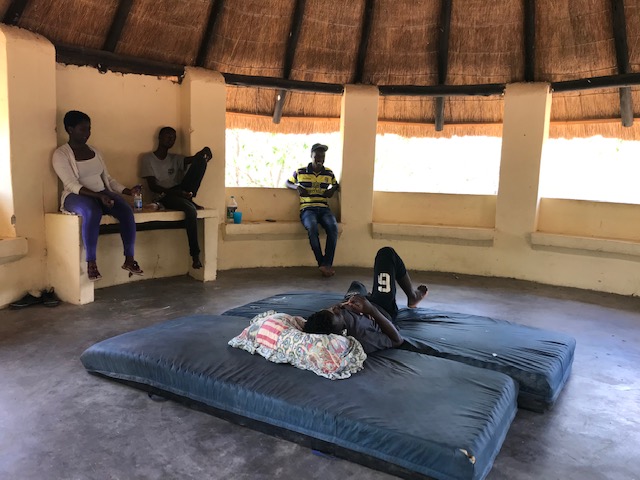 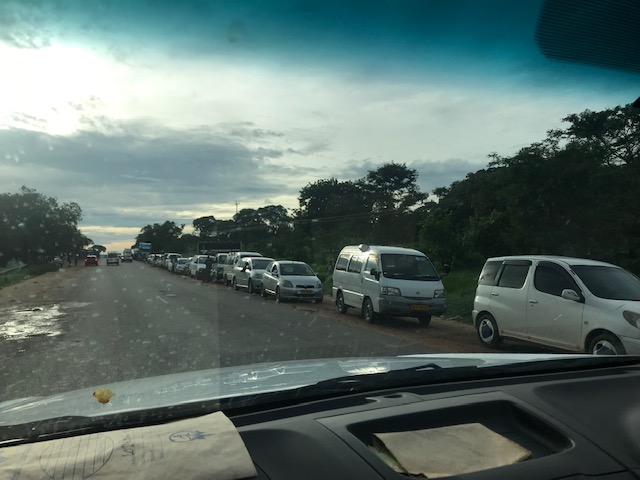 Queues for fuel Karoi and Harare 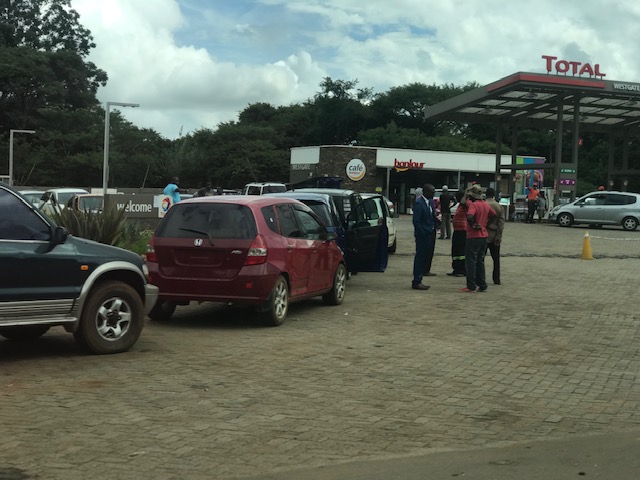 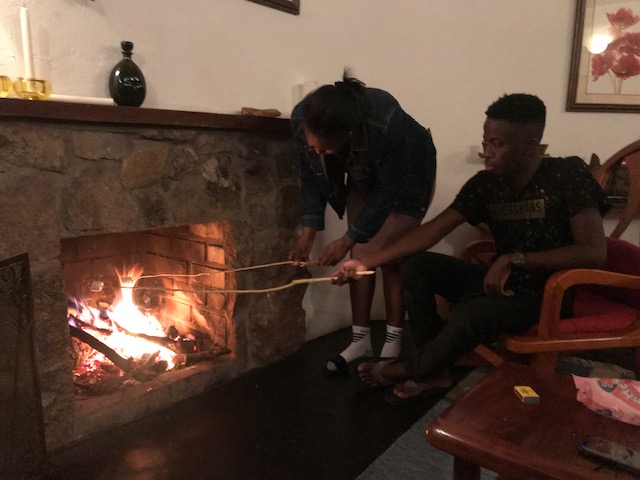 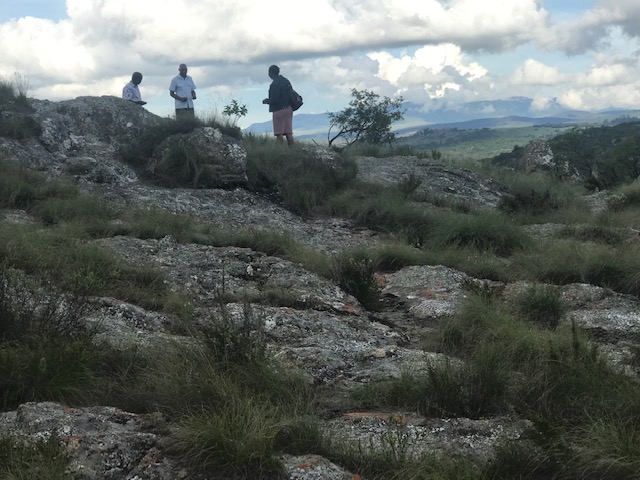 Beautiful views from our cabin in Juliasdale 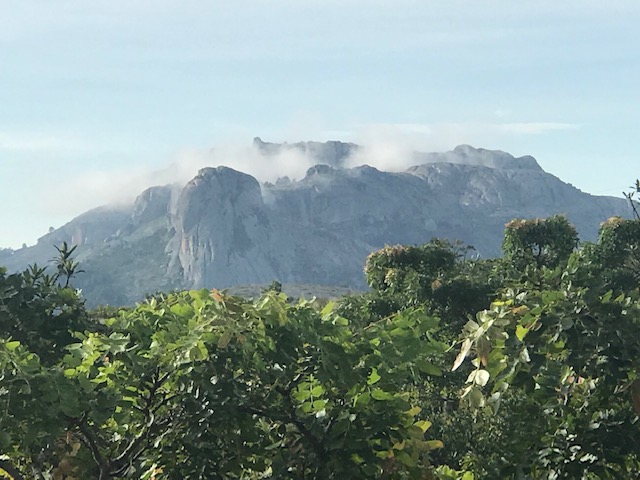 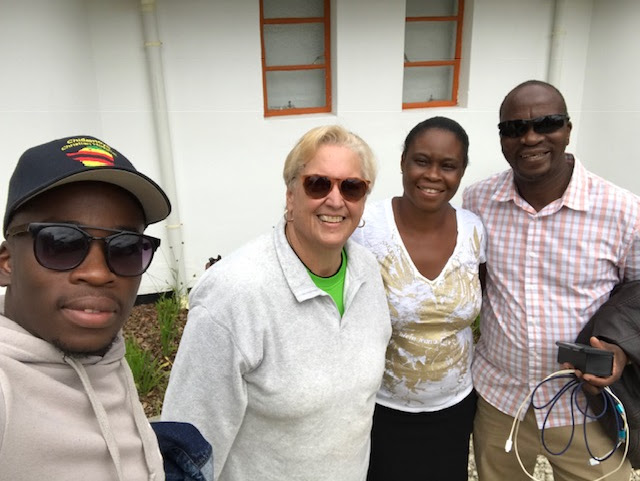 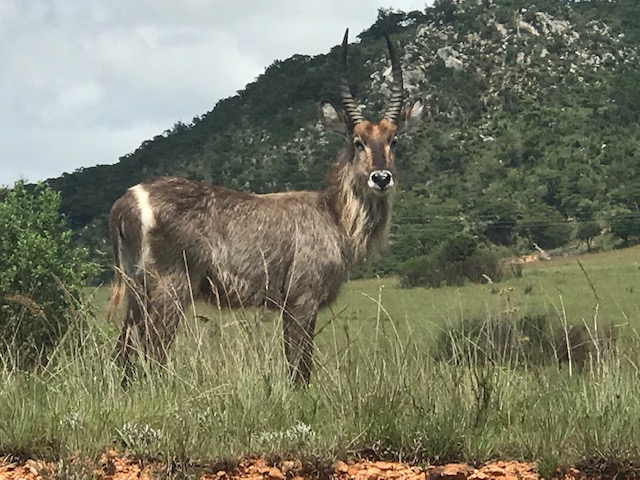 We saw a Waterbuck alongside the road 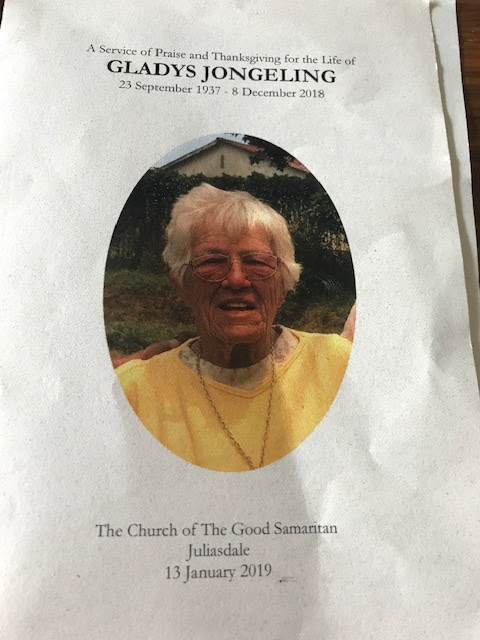 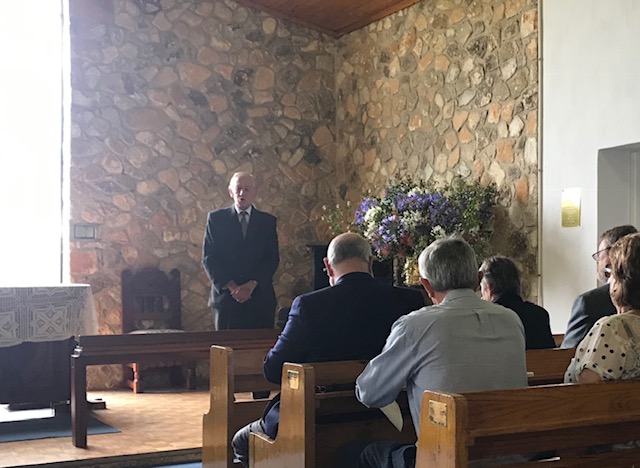 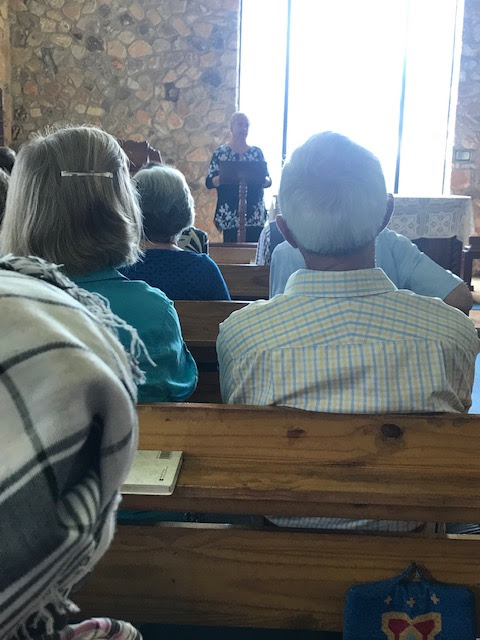 Speaking at the service 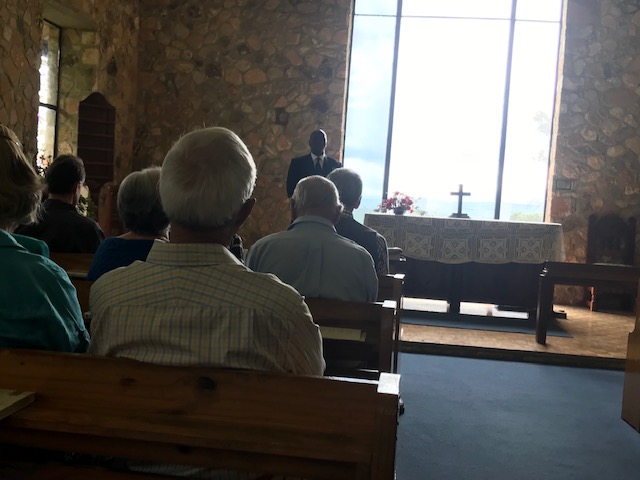 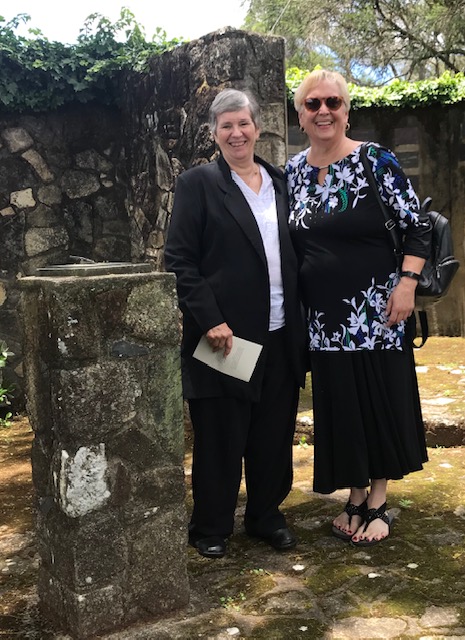 Denise Hill and myself 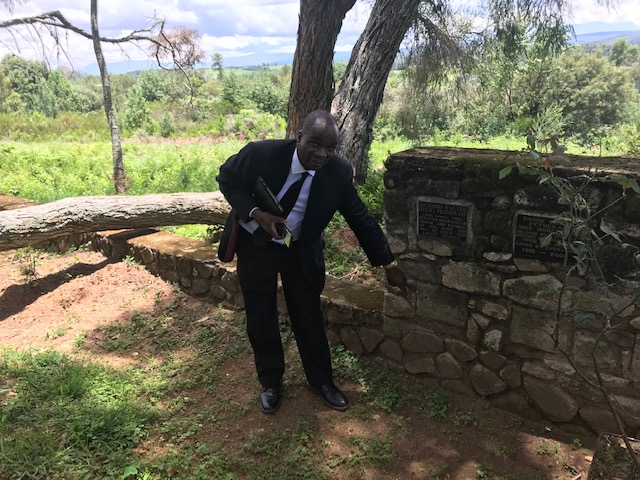 Site where Gladys's ashes will rest in the church garden 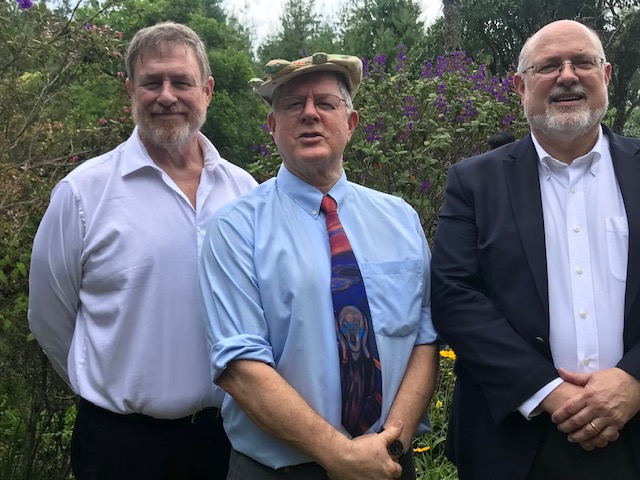 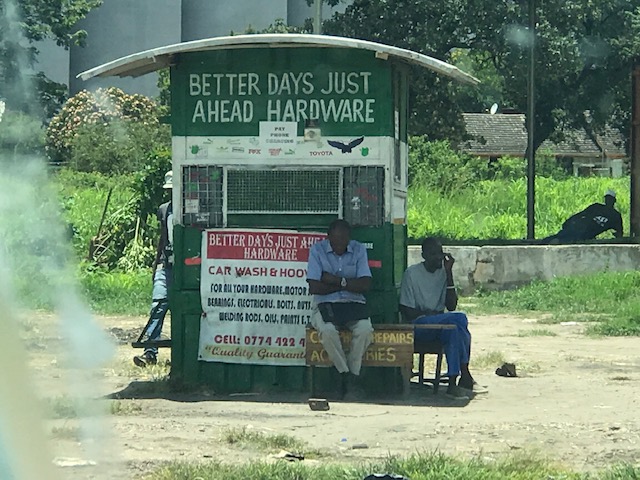