Adventures of the week 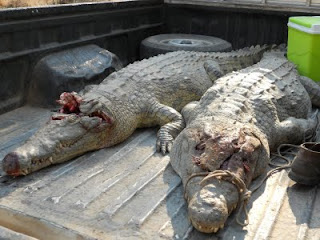 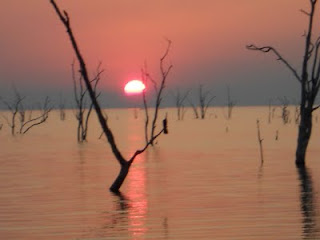 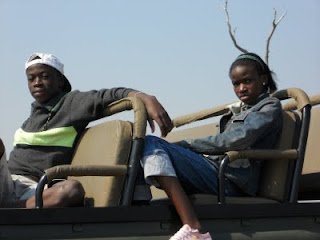 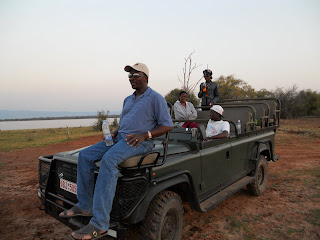 Major and family on safari in Kariba 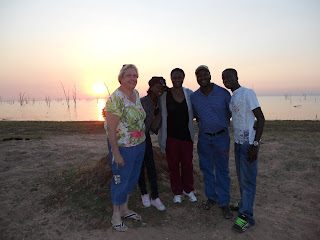 Mereki family and Kathy at Kariba 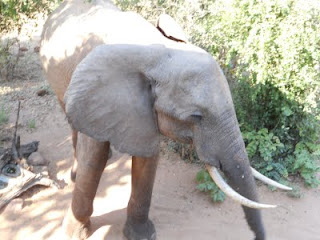 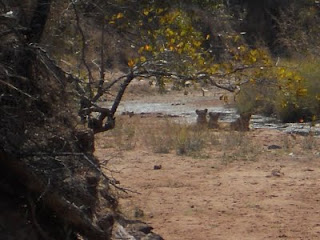 3 lions looking at us!

This week we had a 4 day weekend with Monday and Tuesday being Heroes Day and Defense Forces Day. I went with major and his wife Patience and their 2 kids, Michael 18 and Carolyn 14 to a safari camp on an island on Lake Kariba in Mutasadona National Park. We left at 5:30 a.m. on Saturday morning and after getting a bit lost we made it there in about 8 hours.
It was dirt road and some 4-wheel drive parts to it. When we got lost (we drove by the turnoff) we actually drove through a river bed and Patience yelled “lion!” and there was a big female standing up on a ridge near us. We looked around and saw a male and one more female. We continued on and came back the same way when we decided we had missed our turn and saw 3 female lions lying on a sand bar in the river. Definitely a good reason to get lost!
We finally arrived and even though they told us we could drive all the way—it was still an island and we couldn’t get across to it—so they came to get us in a boat to go to Rhino Safari Camp.
Shortly after we arrived we went upstairs into an open area to get a drink and an elephant came walking out of the bush and right up to the open area. Pretty soon we noticed he was going through our luggage! We had brought some peanut butter for them and the elephant was trying to get it. When the guides shouted at him he dropped one bottle he had managed to get out of a paper bag. The guides thought it was medicine we brought because we put our peanut butter in our big plastic medicine bottles—so they were laughing when we told them it was peanut butter and boy had the elephant smelled that! We got some very up close pictures of elephant from the start!
We had a wonderful 3 nights and saw everything from lots of elephants (even babies) to kudu, impala, and crocodiles, lots of different birds, waterbuck, bushbuck, and buffalo. We went game viewing on Land Rovers and in boats. Major even had a chance to go out on a boat and fish one morning—he only caught one small fish but some of the others managed to catch some bream which we enjoyed as our appetizer that night.
We returned home on Tuesday afternoon and managed to get home in 6 hours without getting lost. It was a wonderful time and well worth the bad ride. Come and visit us so we can take you there!
When we got back and started work yesterday (Wed) we had to make up for the 4 days that we were gone. We had lots of patients and then I got called to do anesthesia for a patient who arrived with a big chunk out of his arm from a crocodile bite! The croc had bit him below the elbow and pulled him under and sat on him to drown him. He kicked with his leg as hard as he could into the stomach of the croc and it dropped him and swam away. His elbow was dislocated as well as fingers a bit mangled—but he will live and should be able to use that arm. He will be here for many weeks healing! He is a neighbor to Major at Batanai. He was fishing in the river with a net and dragging his hand in the water with his net. They said the croc was 12+ feet long!
Thursday was CD4 count day and we drew 87 people and started 14 and 8 others of those today on HIV meds. We always have a busy Thursday!
Friday Major left for Harare at 4 a.m. to do some errands. He didn’t get far before a flat tire. Then he only made it past Chinhoyi and blew the head gasket. Dr. Zimudzi also went to Chinhoyi and on to Harare and so he came back and helped out. They started driving slowly home filling it will water every 10 kms. Finally reached Karoi at 3 a.m. and Dr. Z came home and Major travelled on and when Dr. Z got home at 5 a.m. he sent another truck and people to tow Major home. They finally got home at 10 a.m.! What an Adventure! Sounds like it is time to sell the Land Rover!!
We have completely most of the foundation of our new additions—Pediatric ward extension and Trauma/ Stabilization room. We are excited to keep seeing it go up! We just heard this week that Bob the builder from CA will be here in early January to put the roofs on. He is looking for volunteers to help him if anyone is interested and come anytime from early Jan to end of March for any amount of time. Please contact us if you are interested. We can teach anyone to be a builder if you are interested in helping on this project.
The council sent out a hunter today to try and kill the crocs attacking the man whose arm was bit. They killed 2 very large crocs and came to show us this afternoon. They said there are plenty more left in the river.