A BIG wedding, birthday celebrations and holidays in August


This past week was busy getting ready for a big wedding.  Tapson Nyamaharo who works as our Diesel Mechanic/Driver married Tendai Masinire.  The wedding had been planned for several months and we had been having meetings to make sure everything go done and by who, and finally the wedding happened on Saturday, August 10th.


As happens with most weddings here, it was suppose to start at 9 a.m. and it actually got started at 11 a.m.  The minister came at 10:15 and finally 45 minutes later we got everyone to the church.


People showed up before 5 a.m. to start cooking in my driveway  as the bridal party and family members and VIP came to my house in between the wedding and reception, to eat.  We decorated the dining room outside and had tarps up for the other tables.  As I was working with Mrs. Mereki the Maid of Honor (called Best Lady here) came running and hysterically crying  to say she had burnt her  dress on the back—a satin material.  We quickly figured out to make some ribbon bows to sew on both sides of the dress to cover the burn and no one noticed!


I drove the groom and groomsmen to the church and we waited another 45 minutes for the bride to show up.  We were all beginning to wonder if she was the “run away bride!”  The wedding ceremony took 2hours and finally after 1 we proceeded for pictures and lunch.  I drove the bridal and groom and best lady and best man and the groomsmen in the Jeep.  We took the top off to make it a
convertible.  We drove up to the township and around the hospital before pictures!


The lunch was big—sadza, curry flavored rice, chicken, beef (they killed a cow and 40 chickens! and potato salad and fruit and yogurt topping for dessert.  We were so full we never had dinner that night!  Then we were off to the reception about 2:45, where even more people joined in. They had feed all the other people at the church.   We sat under tarps outside the church with the bridal party up on the steps of the church at tables.  The bridesmaids and groomsmen danced in to music and then performed several more dances during the reception.  They practice their “steps” for several weeks before the wedding.


Then the gift giving starts with the bride’s family, then the groom’s family and then other people.  Each gift is announced with much ululation and dancing and shouting.  Even if it is $1 it is a big
thing.  They received many pots, dishes, cups, and money and it was a great time by all.  The reception wound down about 5:30 as it started to get dark.  After the clean-up we all collapsed and by 8:30 I was in bed!  The bride and groom spent that night in my rondoval for their honeymoon.


Summer came back on Thursday morning when we woke up to 70 degrees at 5 a.m. instead of 59 as it had been the morning before!  It is now getting up to 90’s during the day so it seems like summer is already with us a few weeks early.  I haven’t taken my blanket off my bed yet but it might be soon.  We hope it is not a hot and long time until rains start.


This week Monday and Tuesday were holidays to celebrate Hero’s Day and Armed Forces Day.  I
looked forward to sleeping in and at 5 a.m. Monday morning Major called to talk on Facetime—  I said call back later!  Then at 5:15 my alarm on my phone went off—I gave up and just got up!  There is always plenty to do!


I did get to come to the hospital at 9 and we worked until 1 each day so it was great to have 2 afternoons off in a row!  No further holidays now until December!


Monday night we celebrated Mrs. Kajese’s 30th birthday with a dinner and party.  We decorated and made red velvet cupcakes for dessert.  We had a great time and a great celebration. 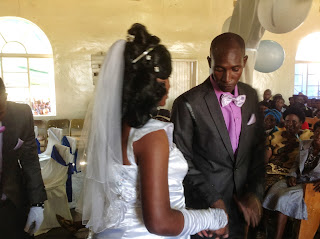 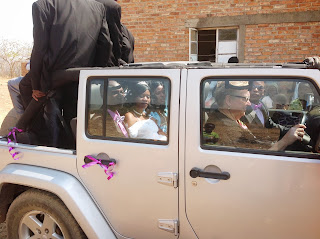 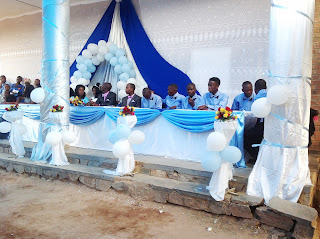 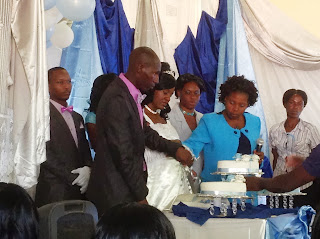 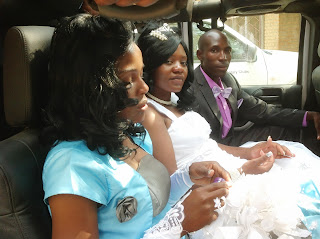 The Bride and groom and Best lady 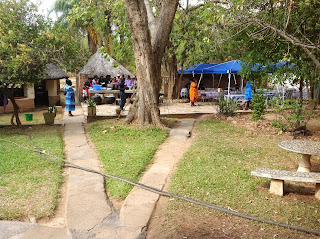 Outside where the eating took place 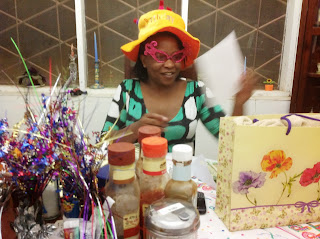 No Kajese celebrating her birthday! She has the famous Chidamoyo hat and birthday glasses on﻿ 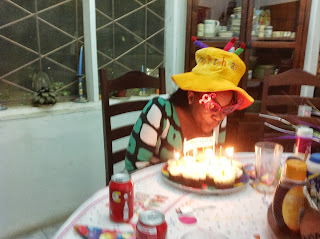