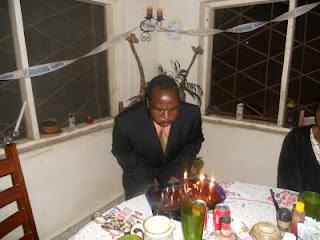 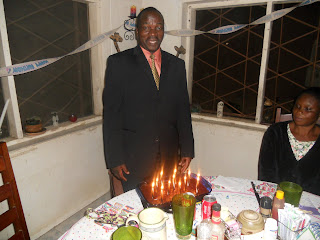 This has been a busy week with both doctors gone from last weekend until Friday morning. Trying to do their job and mine and Major’s all week was a bit overwhelming and thank goodness the week is over.
Major has been in Chinhoyi for 2 weeks attending a course. He got to come home last weekend and then headed back 4 a.m. on Monday morning. His birthday was Friday so I sent money to the Administrator at Makonde Christian Hospital, Tauzen Kandungure, who is also in he course, for him to arrange a cake and drinks for tea on Friday. I also sent a gift for the lodge where he was staying to give it to him at breakfast on Friday.
People in Zimbabwe love a party and so when Tauzen talked to someone else in the class they decided to have a big surprise party for Major. One of the other Administrators stood up on Monday and said her birthday was on Friday and she wanted to have a party and invite everyone. They set up committees for food, entertainment and decorations and asked people to contribute and even Major gave money for this lady’s party—not knowing it was all for him!
The teachers of the course decided that they would give them all Thursday afternoon for the party and so while Major went off for lunch the rest decorated and when he walked in after lunch he was shocked to find the party was all for him! He said he almost had a heart attack he was so surprised! They spent the whole afternoon eating and partying—he was so happy! He was the most popular guy in class since they got out of a whole afternoon of class because of him!
Friday morning when he went to breakfast the woman who owns the lodge he stayed in had everyone sing happy birthday and he shared pumpkin bread I sent and opened his gift—and then they prayed for him!
When he got home Friday night I had a fried chicken dinner ready for him, his wife, Lori and the 2 doctors. He had another party to celebrate! He kept saying this was his best birthday ever. He was so surprised by all!
During the whole dinner last night we sarcastically called it a celebration of our last day on earth! Since May 21st is to be the last day here on earth according to the newest end of time group. Yes we even heard about here and someone paid to put up a billboard about it in Harare! We sat around and talked about all the things we shouldn’t do—like the C/S we did that afternoon—why did we waste our time? I gave Major a card and promised him $500 tomorrow (the day the earth ends)-ha! Won’t have to pay him that, right? I told people don’t even help clear the table—why should I do housework in the last 24 hours on earth? Should we make rounds in the morning or just sleep in? Why should I start anyone on ART this morning at work when we are all going to die? Aren’t we happy we really don’t know the end of the world date or we would stop living our lies wouldn’t we.
It is Saturday night and no big earthquake to end the world yet and ZESA went off as usual before dinner time. Why don’t they just keep it on since the world is ending soon and we won’t have to pay the creditors we have to buy the electricity from. Oh well life goes on—tomorrow we will celebrate the day after the earth was suppose to end party and I guess I have to go do my housework! 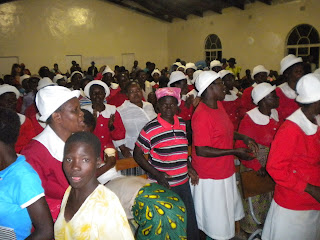